For the first few weeks of school we will be learning about India, with the help of several books and a DVD series. Our focus is around two picture books, Monsoon by Uma Krishnaswami and Chachaji's Cup, by the same author. They are both listed in the Global Village School's 3rd grade curriculum guide. This is a snapshot of our bookshelf for the next couple weeks: 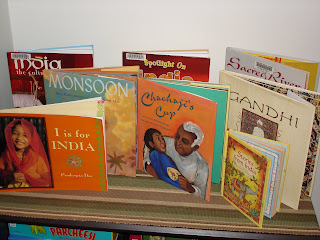 Here is Koopa Troopa showing off one of his favorites: 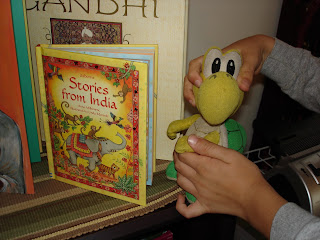 I plan our week using what I have learned from Five in a Row, but basically make it our own. The Chief likes to read the core book several times, and so for five days we read it (if he did not want to read it every day, I probably wouldn't push it, but I would be sure to read it at least once at the beginning of the week, and then again toward the end). Then we take some aspect of the story and pursue knowledge of that subject a bit further. Monsoon was a great book for this. We learned about India and its culture, Hinduism, monsoons and weather patterns, the water cycle, making paper boats... We did this all last week, and will continue this week with learning about the Hindi alphabet, the clothing people wear in India, some of the myths and legends of India, and we will eat at an Indian restaurant. This coming week will overlap with next week, when we will be focusing on Chachaji's Cup. I will do a separate post on what we do with that book later on.

I supplement with several outside sources, mostly from the library. Bobbie Kalman's books are wonderful ways of learning about other cultures. We have also been enjoying the PBS series, "The Story of India." I print a lot of images from the internet, things like what a flood looks like, what monsoon clouds look like, what a drought is like. I find pictures with children doing things in them, so it's easier for the Chief to relate to them. All these pictures I make sure are specific to India, with Indian people in them.

The Chief records what he has learned about in what he calls his "Adventure Book." It's like a scrapbook; black hard covers with a spiral binding. We had tried lapbooking last year, but it was hard to store the lapbooks conveniently in a place where the Chief could refer back to them. I find that since having an "Adventure Book" was his own idea, the Chief is more excited about reading over his work again, and often takes the book down and looks at it on his own. The bonus to this versus the lapbooks is that he has to go through all his work to find the thing he was looking for. This way he can get "distracted" and happen upon bits of information that may not have been his favorite. With the lapbooks, he would just want to look at the same one over and over, whichever was his favorite.

I will say this again--I am so glad to have gotten the Global Village School curriculum guide. The Chief actually is looking forward to doing school with this. The other day he actually said, "I think it's time to do some school now."
Posted by Melanie at 1:14 PM

My family lives on a little homestead in Worcester, MA, where we try to live as self-sufficiently as possible. We love music, stories, and spending time in nature. Along with wescuing wabbits, we homeschool, following the Leadership Education model.
If you are interested in learning more about my fiction writing, please visit my other blog, Melanie R. Meadors.

The Assassination of Julius Caesar, by Michael Parenti

The Castle of Llyr, by Lloyd Alexander 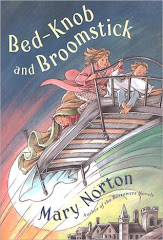 Bedknob and Broomstick, by Mary Norton
VISIT OUR MONKEY SHOP, MONKEYS ON A MISSION where a large part of the proceeds goes to charitable causes!